That’s not because it doesn’t exist — there have been 14 cases of TB in the small community since last October.

It’s precisely because TB is so common that it doesn’t make news. Compare that to St. John’s, when a student at Memorial University is diagnosed with TB there’s a media blitz. Not so in Labrador.

“It’s not new to us in the community,” Nain AngajukKak (Mayor) Joe Dicker said.

‘I just want to be on the safe side, right? I really don’t know much about this disease and just hearing so much about it makes me paranoid.’– Pauline Angnatok

And yet, the number of cases came as shock even to Dicker, who criticized Labrador-Grenfell Health.

“We as a community should be made aware so that we can take measures to protect ourselves,” he said.

“We have been providing a variety of education regarding the TB outbreak we had,” said Donnie Sampson, vice president of nursing at Labrador-Grenfell Health.

“Last week the medical officer of health did several media interviews to explain the outbreak and really try to reassure people that there was no cause for alarm.”

Call it a case of mixed messages.

It’s true the medical officer of health did speak to CBC’s Labrador Morning, but it was clear the number of cases was a worry.

“For one community, that’s quite a high number,” Dr. David Allison said. “It’s really a significant concern for us.”

It’s hard to understand from afar what’s going on in a town like Nain. I’ve never been there, I’m not part of the community, but over the past few weeks I’ve been calling people I know there and asking, “What’s the mood like? What do people think?”

A few people told me they would feel better if the whole town could be tested for TB. Fourteen cases is more than one per cent of the entire population. People said they wanted to know for sure they weren’t infected. 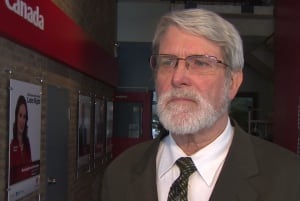 Dr. David Allison, chief medical officer of health for Eastern Health, says the number of cases of tuberculosis in Nain are of concern for the health authority. (CBC)

Pauline Angnatok called the local clinic and asked that her 12-year-old daughter be tested. Angnatok worried because her daughter had spent some time at a friend’s house, and later one of the friend’s relatives was diagnosed.

Angnatok says a staff member at the clinic told her to check back with her daughter’s friend to see if the family had been tested.

“I really didn’t want to go and ask the family … it would have been took rude,” Angnatok said.

“I just want to be on the safe side, right? I really don’t know much about this disease and just hearing so much about it makes me paranoid.”

“It’s very difficult to contract TB. You have to have prolonged contact for quite an extended period of time with someone who is actively coughing and who is sick. It’s not easy to catch,” Sampson said.

“If you feel have been in contact with someone who might have TB, absolutely, still call your public health nurse, and they will take an assessment and identify a priority for you to be tested, and that’s how the procedure works for us.”

Difficult as it may be to catch, TB is also difficult to get rid of — both on the personal and community levels.

Anyone diagnosed with the disease will have to take antibiotics for between six to nine months. Eradicating the disease from an entire population takes much longer.

Pauline Angnatok’s concern highlights the need for more information, but there is a balance to strike. People get treated differently when they have TB. Some still believe the disease is a death sentence, and treat patients accordingly.

“Because of all the attention it gets, people are afraid to come forward,” said Dr. Allison. “The stigma around tuberculosis is significant and it’s worldwide. We have to be very conscious of trying to avoid that.”

Therein lies the challenge: to end TB, health officials need to talk about it relentlessly, even when the community is well aware that it exists.

Almost deaf due to meds – but there is hope